Due to rapidly advancing technological developments, devices and programs that enable access to virtual reality (VR) are already being used successfully in many areas. In medicine, for example, doctors treat phobias in virtual environments using confrontation therapy and can simulate operations realistically. Furthermore, in marketing, it is possible to advise customers in virtual showrooms and present them with realistic images of products. In vocational training, the functioning of various machines can also be demonstrated and tested safely. You can learn more about the enormous potential of VR technologies, especially in adult education and continuing training, in this article.

What Are VR Technologies?

The term virtual reality is usually associated with viewing media content via so-called virtual reality glasses for smartphones or head-mounted displays (HMDs). However, VR-capable devices that enable the display of spatial depth in virtual 360-degree environments appeared on the market as early as the 1980s. These devices already had features such as motion detection of the head and hands. However, older VR headsets differ seriously from modern HMDs such as the Oculus Rift, the HTC Vive or the Valve Index in terms of the realistic display of content.¹

The distinction between so-called non-immersive VR and fully immersive VR refers to the type of display and input devices. This is a purely conceptual distinction and in no way implies that applications in non-immersive VR do not have immersive properties. Examples of non-immersive VR include programs in 3D graphics that are viewed through traditional computer monitors. Input is provided via a combination of mouse and keyboard. Users perceive the environment outside the simulation, while their field of view in the virtual environment is limited to the monitor.²

Immersion is a metaphorical term derived from physical immersion in water. Virtual worlds are particularly immersive because users have the feeling of being in another reality. The virtual environment captures their entire attention and engages their senses.³

In fully immersive VR, the perception of the virtual environment is constantly adapted to the positions and perspectives of the users. This is made possible by full motion detection of the head. The same sometimes applies to the input devices. Motion controllers detect the movements of the hands and transfer them to the virtual world.⁴ In addition to visual aspects, auditory and haptic stimuli also play an important role for sensory perception in fully immersive VR. External sensory impressions are barely perceived at all. As a result, users are almost completely immersed in the virtual world.⁵

Features and Benefits of VR Technologies

From an industry perspective, VR technologies simplify and improve processes in the development, manufacturing, and production of products. Education and e-learning are also areas in which virtual reality applications help to increase learning success. This is made possible by their high interactivity, digital flexibility, and vivid and fascinating content. Above all, VR technology owes some of its greatest innovations and further developments to the entertainment industry and game design. For example, in terms of input devices and a credible representation and staging of virtual environments, objects and characters. Current developments suggest that VR technologies could soon become as commonplace as smartphone apps. A study by PwC concludes that the virtual reality market in Germany will grow by more than 19% annually – up to a market volume of around 280 million euros in 2023.⁶

The special features and advantages of VR technologies in adult education and continuing training are numerous. Learning objects can be experienced not only visually and auditorily, but also haptically. This allows workplace hazards to be simulated and the handling of machines to be tested safely. In addition, users can interact with other participants regardless of location, which promotes exchange among them. Complex activities are trained realistically, with true-to-scale representations in a credible three-dimensional environment promoting learning processes. Even imperceptible aspects such as ultrasonic waves or air currents can be visualized with the help of VR. Compared to formulas or descriptive texts, visual representations in VR are therefore often better memorized by learners. Training opportunities in VR therefore not only save costs and resources. They can also be adapted to the individual needs of the participants.⁷

Children, adolescents, and young adults are generally very interested in and fascinated by VR. Older adults may be more skeptical about this technology. Most users tend to have little experience with VR technologies. For example, they only look straight ahead, even though they are offered a 360° perspective and interaction options. The input options in VR are mostly intuitive and based on real-life conditions through the motion detection of the head and hands. However, these possibilities must first be communicated and tested. Teachers can also be represented by an interactive, animated figure within the virtual world. These animated figures should be designed as credibly as possible and equipped with the necessary skills by experts.⁷

The phenomenon of so-called cybersickness is another problem that can have a negative impact on VR experiences. The discrepancy between the perceived and the sensed movement leads to nausea and dizziness for some users. Software developers counteract this phenomenon by restricting the user’s field of view during movements. Instead of simulating natural locomotion, users can also teleport from one position to the next. High-quality software that takes such hurdles into account is therefore a basic prerequisite for successfully exploiting the enormous potential of VR technologies in adult education and continuing training.⁷

Examples of VR Technologies in Adult Education and Continuing Training

VR Tour of the Drainage Tunnel in Sarnen

For employee training and onboarding of new workers, our Swiss colleagues from MPS Europe developed a VR tour of the drainage tunnel in Sarnen in non-immersive VR for the canton of Obwalden. See HERE how a 360° VR tour is created. You can also take a 360° tour of the construction site in Obwalden without a HMD or VR glasses: TO THE CONSTRUCTION SITE.⁸

MPS Europe also developed a training program in fully immersive VR for the Swiss federal railways (German: Schweizerische Bundesbahnen, SBB). With the so-called “SBB Switching Off and Earthing” app, railroad personnel can perform various exercises related to electrical lines and power pylons. The employees experience real-life situations in the track area – without endangering the safety of the staff. In addition, training can be conducted more frequently because participants do not have to be on site. Get an impression of the app in this video: SBB Switching Off and Earthing.⁸ 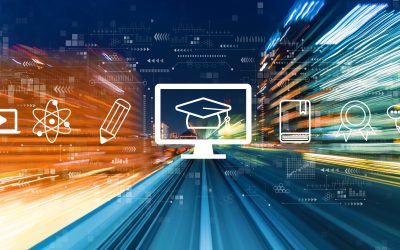 Due to the rapidly advancing digitalization and the pandemic situation of the past years, e-learning experienced an upswing. Technological progress not only facilitates time- and location-independent learning, but also enables learners to take a self-responsible approach to their personal learning goals. We focus on current formats and possibilities around the topic of e-learning.